Posts
You are here: Home / Posts / Individuals from the Irish War of independence / Countess Markiewicz

Countess Markiewicz was born as Constance Gore-Booth in 1868 in London. Her father had an estate at Lissadell in the north of County Sligo, Ireland; the children grew up there and Constance and her sister Eva were childhood friends of WB Yeats whose artistic and political ideas were a strong influence on them. Constance went to study art at the Slade School of Art in London, she became politically active and joined the National Union of Women’s Suffrage Societies. 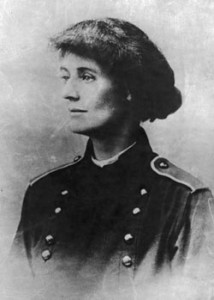 She moved to Paris, marrying Count Kazimierz Dunin-Markiewicz, a Ukranian aristocrat. The couple settled in Dublin where Constance established herself as a landscape painter and helped found the United Artists Club. Socialising in artistic and literary circles, she met and became influenced by revolutionary patriots. In 1908 she joined Sinn Fein and the revolutionary women’s movement, Inghinidhe na hEireann; she also began to perform in plays at the Abbey Theatre.

In 1909, she founded Fianna-Eireann, an organisation that instructed boys in military tactics and the in the use of firearms. She joined James Connolly’s Irish Citizen Army, designing their uniform and composing their anthem. During the 1916 Rising, she was second in command to Michael Mallin in St. Stephen’s Green. Under sniper fire from the surrounding buildings, including the Shelbourne Hotel, they retreated to the Royal College of Surgeons. When the leaders of the Rising surrendered, she was arrested, incarcerated in Kilmainham Gaol, she was sentenced to death but the sentence was later commuted to a life sentence.

Under the general amnesty she was released in 1917 and in 1918 she ran in the general election becoming the first woman elected to the British House of Commons, however in line with Sinn Fein policy, she refused to take her seat. She later served as Minister for Labour in the Irish cabinet becoming the first female cabinet minister in Europe. She left government in 1922, opposing the Anglo-Irish Treaty, fighting actively for the Republican cause during the Civil War. She again won election to government in the 1923 and 1927 general elections. She died in 1927 and is buried in Glasnevin Cemetery, Dublin